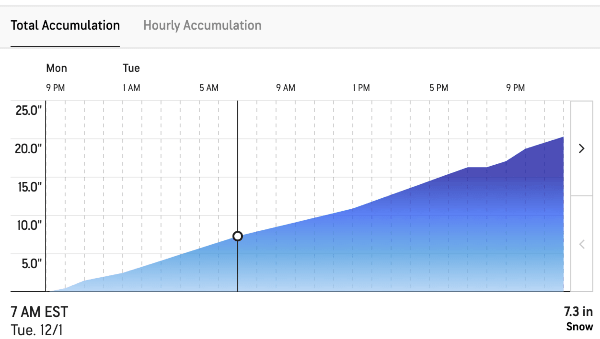 What a way to begin.  Our first snow event and it’s a triple whammy; timing, accumulation, & duration.  Who would have thought that just this past weekend (yesterday!), the weather was gorgeous and  we were working on fall clean-ups.

By 7am tomorrow we may have anywhere from 3-6″, during some periods, at a rate of an inch an hour.  It’s not stopping there though, it will continue to accumulate at a high rate for the entire day.

We will dispatch crews after accumulations reach 2″, however, if the snow falls as anticipated (nearly an inch an hour), please keep in mind, you may have an additional 2+ on your driveway in the morning.

Live updates will appear below.

UPDATE:  Tuesday 7:45 am – We’re still out plowing.  The initial rain/snow mix created a later as well as heavier than anticipated accumulation.  If you have to leave the house, be careful.  Not only are many trees/branches down but the roads are slippery, and some have not been plowed by the cities yet.

If we haven’t reached you yet, don’t worry, we will.  We’re also currently anticipating a minimum of 2 more visits before our first snow event of the season is over.

Hopefully, this doesn’t set the tone for the rest of winter, we haven’t seen a storm like this in years.

On a positive note, it looks like we can expect less snow in total for this storm, approximately 8-10” less!

UPDATE: Saturday 12/5/2020 – For those of you who may have missed our email on Thursday afternoon, I was unable to update during the storm or after the storm because we lost internet & phone service for 2.5 days right after my first update.  I apologize for any inconvenience this may have caused.